Last night at Burna Boy's show in Atlanta, something totally unprecedented happened that was quite a shock to even those who were expecting the craziest things to happen. Burna Boy singled out a fan close to the stage and asked his security men to throw him out!!

He accussed the poor dude of having the wrong attitude and discouraging him as he said: "your face is not encouraging me". He then dipped his hands into his pocket and refunded his ticket money right then and there and subsequently asked security to escort the hapless fan out.

Apparently having realized the gravity of his error, or stunt should i say, he had a change of mind and later invited the now overjoyed fan on stage. They then danced his popular "gbese" dance. Well, i don't care whether that was a mistake or stunt, I love Burna Boy but he shouldn't do that again.

See both videos below...

ICYMI, @burnaboy legit refunded someone his ticket money and told him to go home at his show in ATL yesterday. 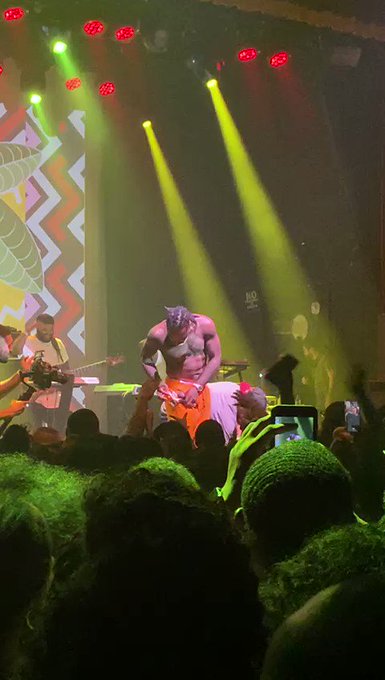 1,580 people are talking about this

Burna boy later called the guy up on stage and they danced together.

773 people are talking about this
Read 320 times
Tweet
Published in Entertainment
More in this category: « Burna Boy To Release "Gum Body" Video Today Ebuka opens up on being responsible for Tacha’s second strike in BBNaija »