In an apparent reaction to last weekend's outburst by actor Aremu Afolayan after some airport officials frustrated him and his family members at the Murtala Mohammed International Airport in Lagos, authorities of the Federal Airports Authority of Nigeria (FAAN) have come out to state that the airport terminals are free and that no official should be given money  before gaining access into the terminal.

Recall that Afolayan in a viral video he shared on his Instagram page, blasted President Buhari, Lagos state governor Akinwunmi Ambode and officials at the Lagos airport after he was denied access into the terminal to see his sister off who was traveling out of Nigeria. Afolayan in the video, accused the airport officials of demanding money from him before gaining access into the terminal.

In a statement released today, FAAN stressed that "access to the terminal building is free".

See a copy of the statement below 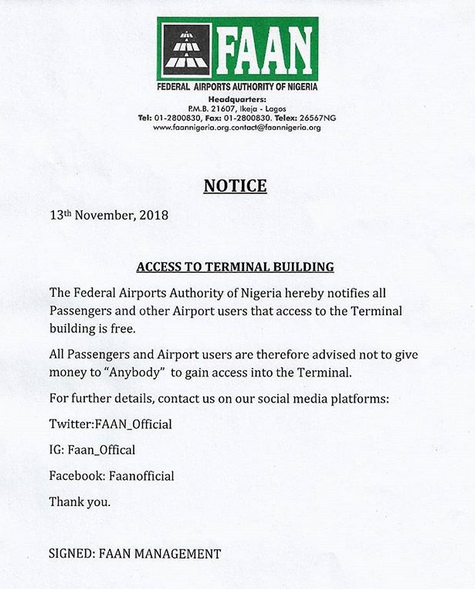 More in this category: « CNN files a lawsuit against President Trump and top aides for banning reporter Jim Acosta from the White House FG to sack teachers without basic qualifications by December 2019 »