The recently held Soundcity MVP awards have continued to receive buzz even though it looks like one of the nominees of the night, Peruzzi might be shading them over his inability to pick an award.

It would be recalled that the rising music star was among the nominees for the 'Best New Act' category which he lost to Teni The Entertainer. It looks like it didn't go down well with him as he took to his Twitter page on Sunday, January 6, 2019, where he tweeted about being the hardest working new artist in the country. 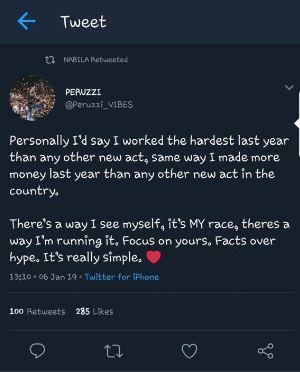 However, Peruzzi has since taken down the tweet. We leave you guys to be the judge and jury as to if this tweet is actually true or Peruzzi had his emotions taking over judgment.

Just in case you missed out, the 2018 Soundcity MVP awards saw some of your favourite celebrities grab awards for the various categories of the night and the biggest winner of the night was Burna Boywho went home with four awards.