Chinese social media app, TikTok, is still able to access notes on iphone users' clipboard, Apple's beta iOS 14 release has revealed, showing that the app has not kept to its promise early this year to stop accessing sensitive information on customers phones.

TikTok came under fire earlier this year for accessing devices’ clipboards, and in a statement promised to end it's snopping actions, but users testing the new operating system of Iphone have found TikTok has not kept its promise.

When the TikTok app accesses the clipboard on a device with iOS 14, a notification appears at the top showing that TikTok was looking at the clipboard every free strokes even when it was running in the background, the Telegraph reports. 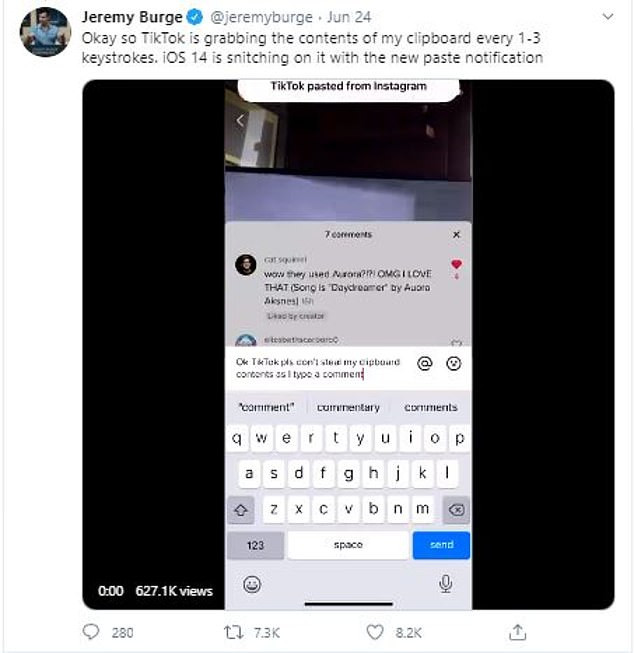 A video shared on Twitter shows a user typing a comment in the app and every few seconds a banner alert appears, letting him know that TikTok has accessed his clipboard.

However, this app is not the only one sneaking in the shadows.

The Telegraph notes the banner appears on devices running on iOS 14 when using other apps including AccuWeather, AliExpress, Call of Duty Mobile, Google News, Overstock and Patreon.

A TikTok spokesperson in response to the new allegations says the company has taken note of  'the action' and that it has submitted an update to the App Store to have the feature removed.

TikTok last year was fined $5.7 million by US authorities to settle charges that it illegally collected personal information from children.

The Federal Trade Commission said in February 2019 the penalty meted towards the social network, which had been known as Musical.ly, was the largest ever in a children's privacy investigation.

The app, which has been surging in popularity with young smartphone users , failed to obtain parental consent from its underage users as required by the Children's Online Privacy Protection Act (COPPA), FTC officials said.

FTC chairman Joe Simons said: 'The operators of Musical.ly - now known as TikTok - knew many children were using the app, but they still failed to seek parental consent before collecting names, email addresses, and other personal information from users under the age of 13.’

'This record penalty should be a reminder to all online services and websites that target children: We take enforcement of COPPA very seriously, and we will not tolerate companies that flagrantly ignore the law.'

More in this category: « IGP orders probe of policemen who arrested D’Banj’s rape accuser, Seyitan Babatayo Chinese Scientists warn that pigs could be the source of next pandemic as strain of swine flu in China has potential to spread to humans »